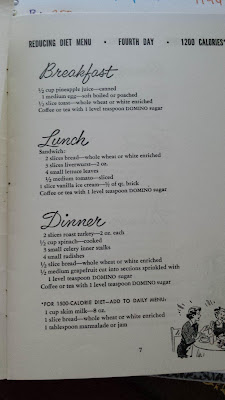 This week for prep I made a batch of little pretzels in place of dinner rolls.  I supremed some grapefruits, and I washed, weighed, and bagged some snack veggies. 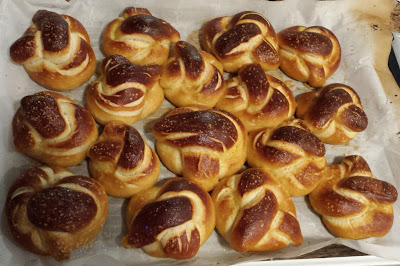 Typically I make 8 large soft pretzels with this recipe, but I cut the dough further into 16 pieces to make little pretzel shaped rolls instead. Some came out a bit larger than others, but I have been eating the smaller ones with dinner to make sure that I'm at or under my calorie calculations if they had been perfect. I use Alton Brown's soft pretzel recipe and it turns out fabulous every time. Each roll comes in at roughly 150 calories according to the recipe, but I'm counting them as 200 to be safe.

For breakfast i'm skipping the liquid calories suggested by canned pineapple juice and I've moved the grapefruit from dinner to this meal. 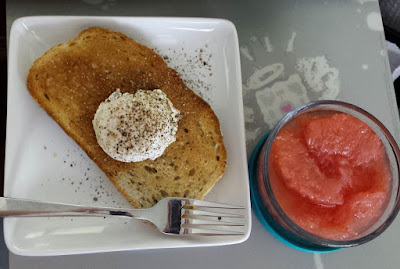 Light rye toast with a poached egg, half a grapefruit with 1 tsp sugar, coffee with sugar (not shown) - 258 calories.

For lunch, it's liverwurst with grain mustard and lettuce on rye toast, and my veggie snack bag. The veggies I've been treating as my any-time snack, along with the "ice cream" you'll see later. 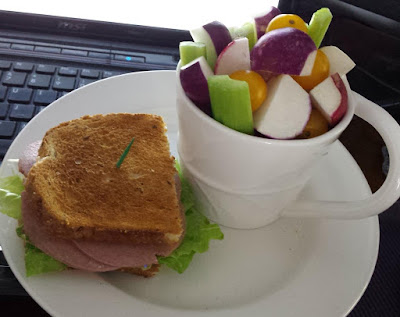 The liverwurst was really not very strong in flavor, I expected it to be more liver-y but it was kind of like mild soft balogna. It wasn't bad but I don't think I'll be having this specific brand again if I do try liverwurst lunch in the future.

The veggie bag takes the tomato from lunch and adds the radish and celery from dinner. It's 4 oz of "easter egg" radishes, 3 oz celery sticks, and 2 oz cherry tomatoes, coming in at about 56 calories.

For dinner, we have roast turkey. I bought a single breast portion, coated it in seasonings and baked it. It was enough for the whole week for the two of us. The spinach salad is dressed with 1tb of a tomato vinaigrette I made, and 1/2 oz candied walnuts. I also had 1 tsp of grain mustard with my pretzel roll. 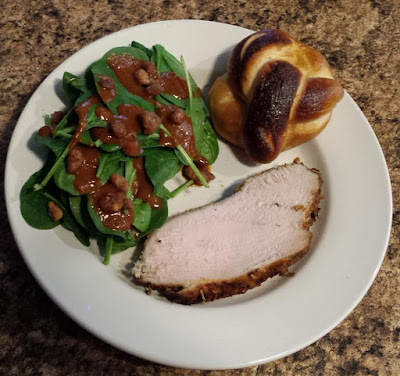 To make the dressing I put 2 tsp of olive oil in a small skillet, added some of my turmeric mix spices (turmeric, paprika, crushed red pepper, cinnamon, salt) until they started to sizzle and become fragrant, then I added 2 tb minced shallot and  2 tb balsamic vinegar. Let that reduce over a low heat for a few minutes, and then add the flesh of one medium tomato, about 4 oz.

The flesh is what's left of the tomato after peeling and seeding it. To peel the tomato run it under hot water for a minute or so, or drop it in boiling water for about the same amount of time, then wipe off the peel with a paper towel. Cut it in half and remove all the seeds, then mince what's left and add to the dressing. Give it a minute or two to break down and then you can serve the dressing warm over the spinach, it's pretty tasty. Makes roughly 13 tbsp, I dressed my salad with 1 tbsp at 13 calories. 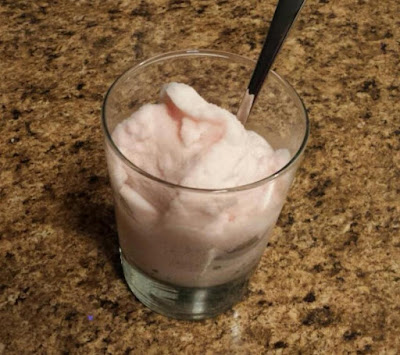 Peppermint icemilk - I'm calling it icemilk because I didn't use cream, I used whole milk. This is made in the blender with milk ice cubes. 8 oz whole milk (half frozen half liquid), 4 tsp sugar, and 3 starlight mints, blend until smooth. I let it set up in the freezer in a tray for about half an hour before stirring and serving.  One recipe makes two servings - 113 calories each.

Next week is full of fun with pie, jello, and fish dinner. I'm really looking forward to it!
Posted by Unknown at 3:43 PM