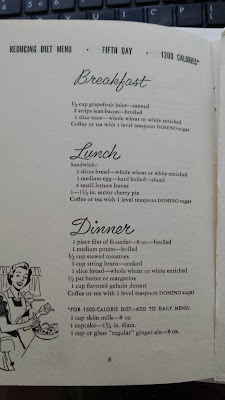 This week was one I have been looking forward to more than most. For prep, I turned the rest of my grapefruits into juice, hard boiled some eggs, and prepped six trouts for baking.

Behold my terrifying and hilarious french cat apron. My boss brought this back from Paris for me as a gift a few years ago, it's the best apron ever. 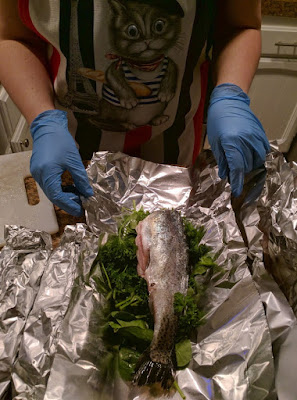 I don't spend as much time prepping trout as some people do, because I bake it with the bones in and remove them as I'm serving it. I feel like you get more fish that way, losing less of it to the knife when you try to take the bones out while it's raw.

For this week, I placed my cleaned trouts on a bed of parsley and spinach, stuffed the body cavity with garlic and shallots, salted the inside and out thoroughly, and then made them into neat little trout envelopes, stored in a bag in the fridge. I moved them to the freezer on Wednesday, and took one out to thaw in time for dinner each day after that. 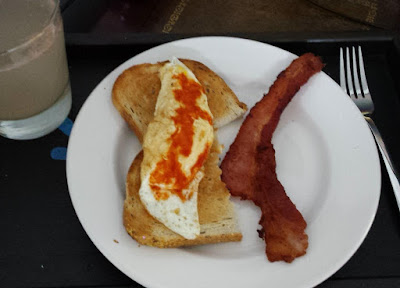 For breakfast, the book called for two strips of bacon, 1/2 cup grapefruit juice, and dry toast. Instead I'm having one strip of bacon, an egg over-easy with Tapatio hot sauce, toast, and grapefruit drink, which is three tablespoons of grapefruit juice in 8 oz of sparkling water.

For lunch, the menu lists bread, boiled egg, lettuce, and cherry pie. Don't tell Domino sugar, but I'm not having any lettuce leaves this week. 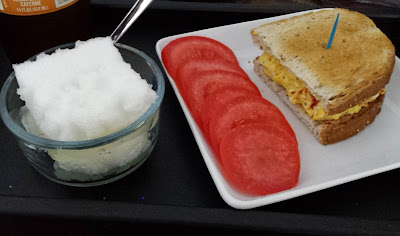 Using one hard boiled egg per day, I added my mayo mustard mix, salt, pepper, and paprika, and made egg salad sandwich. Served with half a tomato with salt, and my homemade lemon rose jello fluff.

When I was a kid my mom used to make a "jello pie" which was several layers of whipped and unwhipped jello, so I thought I'd take a shot at whipped jello this week.

The jello fluff was made with two packets of gelatin, 1 cup lemon juice, 2 tb sugar, 1/2 tsp rose water, and 1 c water. I put it in the fridge to chill for about half an hour, then as it was starting to set I whipped it until it was frothy and then put it back in the fridge. It ends up separating a bit as the bubbles all rise to the top, so you get a thin layer of regular jello at the bottom and this fluffy whip at the top.

Lemon rosewater is one of my favorite drinks during the summer when it gets too warm out, and the flavor is no less refreshing when it's chilled jello whip. 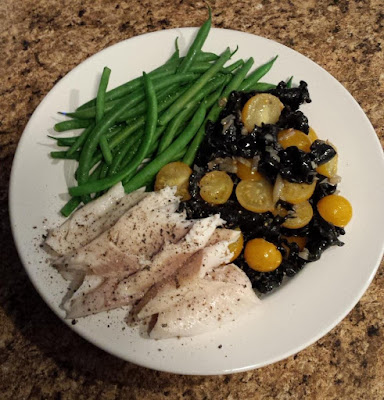 For dinner I got super lucky at the Saturday farmer's market. There is a local pasta artist who makes a variety of awesome fresh pastas from locally grown grains, and this week he had squid ink pasta on the table. The flavor is very neutral, and similar enough to regular pasta that Randy said if I hadn't told him what it was, he wouldn't have known it wasn't just regular pasta with food coloring. I personally think it has a bit of a savory flavor that's different from regular pasta and goes well with seafood, so we're having squid ink pasta instead of boiled potato.

I baked the trout, steamed the green beans, and then used the garlic and shallots from inside the trout to make a brown butter & lemon sauce for the pasta and cook down the cherry tomatoes a little bit.

For pie, I was set on making my own filling, and it's not cherry season right now. Randy suggested strawberry rhubarb pie after seeing some rhubarb on the shelf at the store, even though he's never had it before and I've never made it before. This was also my first time attempting a lattice top pie, so I probably could have done better getting a golden crust on top but I think it turned out pretty well anyway. 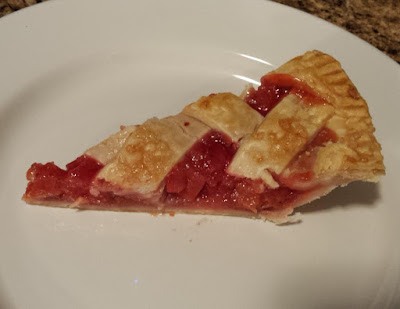 The filling was 12 oz each of strawberries and rhubarb, set in a bowl with 1 cup sugar, 4 tb corn starch, 1 tb water, 1 tsp lemon juice, 3/4 tsp cinnamon, and 1 tsp vanilla. I left the bowl in my fridge for a few hours, stirring every 30 minutes, until a good amount of liquid had come out of the fruits, then scooped the solids into the pie crust, and added just enough of the juice to fill the shell. Then I made a lattice over the top with a second pie crust, brushed with some egg white, and baked for about 40 minutes at 375 until the crust was golden.

The pie comes out to 170 calories per slice, probably a little less because I didn't end up using all of the top crust or the filling but I left them as part of the total anyway.

Next week we have another liver dish on the menu... yummmm.
Posted by Unknown at 3:55 PM