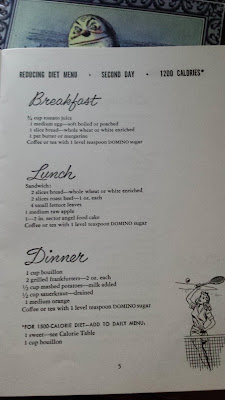 So this week our breakfast and lunch menu is nearly the same as last week. My prep was much less exciting. I finished baking a par-bake loaf of Sourdough and sliced it into 1oz portions, along with a loaf of angel food cake. My chicken was already made from last week so I just had to thaw that out in the fridge overnight, and everything else was made at mealtimes. 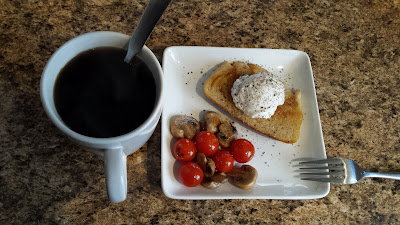 For breakfast I'm sticking with the poached egg on toast. I don't like tomato juice, so instead of that I'm having equal calories of button mushrooms and cherry tomatoes. I decided to use the butter allowance in spray oil to toast my bread in a small skillet and then fry up the mushrooms and tomatoes in what's left in the pan afterward. Poached egg, sourdough toast, mushrooms and tomatoes, butter, and coffee with sugar - 248 calories. 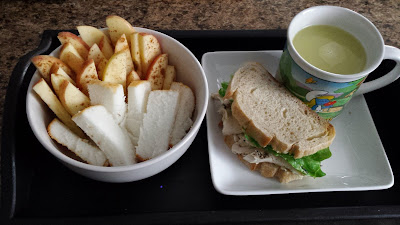 For lunch and afternoon snack, we have the same chicken sandwich from last week because I couldn't find a packaged roast beef I was happy with and I already had the chicken. Since the sourdough bread is much smaller than the bread I was using last week, and at 62 calories per 1oz slice, I'm having two pieces with lunch. I've also moved the bouillon from dinner to lunch, because at this point I'm addicted to soup and sandwich.

I end up snacking on the apples and angel food cake over the course of the afternoon while I'm working. It's way too much food for me to eat in one sitting. Sprinkled on the apples is a very light dusting of Spice Islands Pumpkin Pie spice mix, it's something like cinnamon, nutmeg, and mace, and it's pretty good for making your apple and cake more exciting without adding any extra calories.

Dinner said we should have frankfurters, but I couldn't convince myself that was a good idea, so instead we're having bratwurst. One link is actually 10 calories less than the suggested two hoddogs, so dinner is one sausage, half a cup of sauerkraut, mashed potato with milk added, and half an orange. 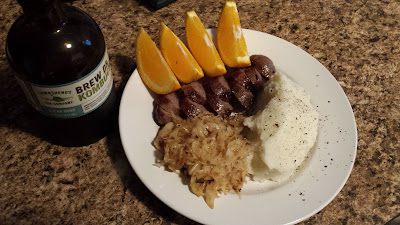 To make the sauerkraut more palatable, I drained the pan I cooked the sausages in of any left over oil, then tossed in some caraway seeds along with the sauerkraut. Get all the brown bits out of the bottom of your pan, then season with salt and pepper to taste.

The potato is one boiled potato mashed with two tablespoons of milk and some salt.

Next week we're having roast chicken, and a grapefruit breakfast adventure!
Posted by Unknown at 1:32 PM