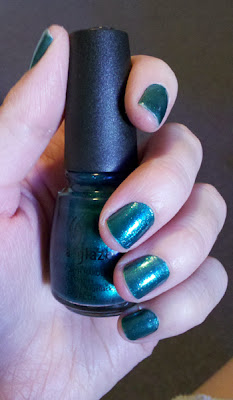 Watermelon Rind is a super-sparkly emerald green. I've read it described as "glass-flecked" and I can see why. My photo here does't do it justice, since this was taken after several days of wear. To give you a better idea, around my house this is called "beetle green" because it looks like the spectacularly brilliant sparkly carapace of an emerald beetle on each of my fingertips. Seriously if I heard this was made out of beetles I'd be a little disturbed but I'd totally believe it.

It was released as a summer color in 2009, but I wear it all the time, and I think it is gorgeous as an alternative to red around the holidays.

Coverage: 8 fingers - The coverage of this color is what you'd expect from a micro-glitter, it takes 2-3 coats to achieve an even opaque cover. Once it's on you will marvel and stare though, I promise. It hardly needs a top coat and it is very chip-resistant.

Wear: 9 fingers - I've abused the hell out of this polish. Everything from funning shelter dogs to metal-filled medical record filing, it is built to last and the glitter is easy to touch-up if you so desire.

Clean-up: 7 fingers - It's glitter folks. It can be difficult to remove but if you let your polish-remover-soaked- cotton-wad sit on your nail for a few seconds and then wipe, it'll budge quicker than most other glitters.