Someone shared this diet booklet to Reddit not too long ago. I personally thought it looked both reasonable and tasty, so I'm using it (modified a bit here and there) as a meal plan. I typically aim for 1200-1300 calories a day anyway. I'm 5'6" with a desk job so I don't need much more than that to sustain me on average. I'll be using one day for each week for the next 14 weeks. This is week one.


I like to prep on Sunday, so this week's prep included baking a pie, weighing out and shaping burger patties, making a carrot slaw salad, and roasting some chicken breasts. I made a second batch of the salad on Wednesday, and froze half of the pie and two chicken breasts for future weeks. Randy is eating this plan along with me, but he needs more calories than I do so his plates look a bit different. 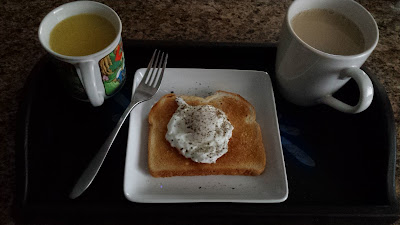 I chose to have a whole piece of bread with breakfast, and skip one piece of bread from the lunch menu. Also I have opted for milk in my coffee instead of jam on my toast. I smush up the egg and spread it over the toast so no jam or butter is needed. 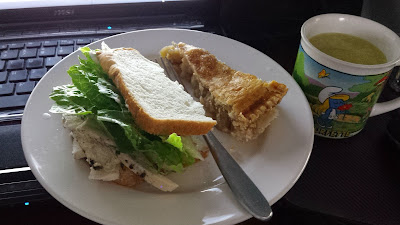 I didn't have time to make consomme and I'm not fond of the consomme concentrates from the store, so instead I'm having "better than bouillon - roast chicken" broth. I made the roast chicken and apple pie myself, so I could control what went into them.

The chicken is a whole boneless breast, butterflied and topped with minced garlic, fresh basil, and fresh thyme. Roasted in the oven for 35-45 minutes until internal temp hits 165 F.  One cooked breast was enough for five days of sandwiches. I'll be having this next week too instead of roast beef sandwiches.

The pie recipe is much longer, ask and I'll type it out if you want. It involves making a roux on the stove and par-cooking the apples before putting them in the pie crust in the oven. I was surprised when my calculations ended up making the ideal slice about the same size as the book called for to hit about the same calorie value. 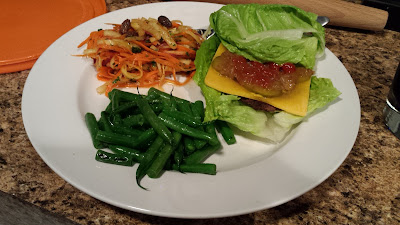 I weighed out the hamburger meat before cooking, and the caramelized onion is just a minced onion cooked down with a spritz of oil, salt and water.

The carrot salad is mostly shaved carrot, but also has fresh pineapple, parsley, raisins, and a dressing made of equal parts lemon juice, olive oil, and maple syrup. I think it was 1tb of each for about 5 cups of carrot, 1/2 cup of pineapple, 2 oz of raisins, and about 2tb of minced parsley. I used rainbow carrots so some are yellow and purple in addition to the regular orange carrots.
Posted by Unknown at 3:31 PM