Bond With Whomever by Essie with Revlon's Wild Violets

Bond With Whomever is a fabulous purple cream from Essie. It was my first Essie polish and secured a place in my heart for the brand, both by being an awesome color, and by having a great formula. It's a springy color, and it's shown here paired with dotted flowers in Wild Violets from Revlon, with glitter centers in Scorpio from Color Club.


Essie is among the higher-end drug store polishes, but is not super expensive, and you get a lot of wear for your money. This reaches opacity in 1-2 coats and is so shiny It hardly needs a top coat. I wear it when I travel and it often looks as great when I land as it does when I leave. The inoffensive milky color removes easily and doesn't stain. Color in the bottle and on the hand are completely identical and completely awesome.
I give it a 9 out of 10.
Posted by Tk Wojcik at 7:30 AM 1 comment: 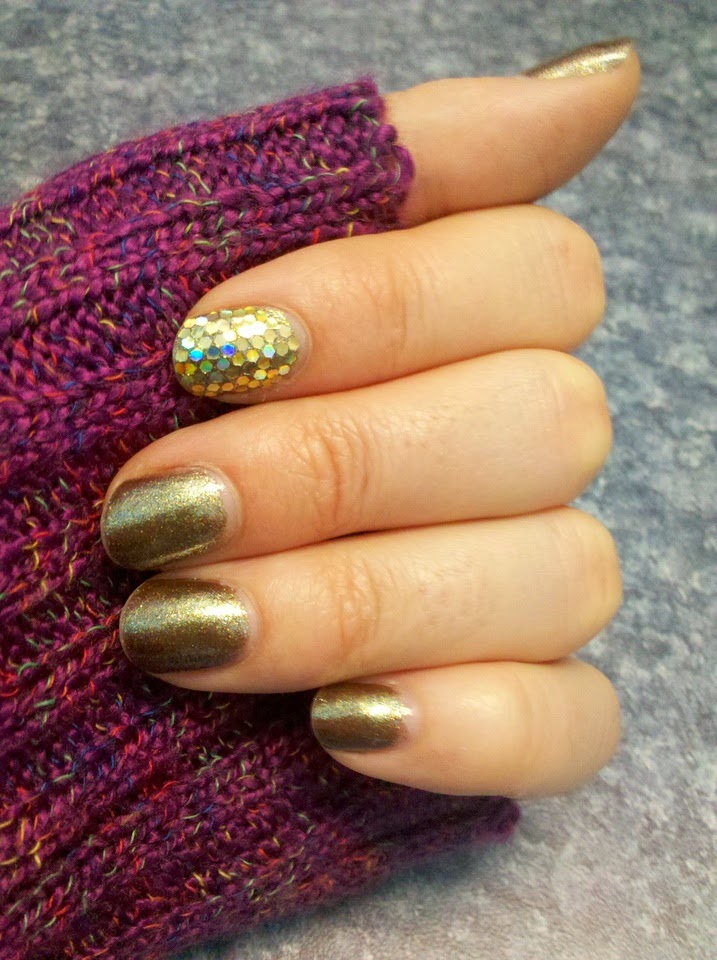 Scalding Emerald is a very pretty olive colored micro-glitter which leans gold or even a bit red in the right lighting. It was released as part of the Hunger Games collection from Covergirl, and I love that there were minis available because they are so much easier to take through the airport in my carry-on bag. This was my first try at individually hand-placed glitters, and the effect of the gold holographic glitter from Essence along with this beautiful polish was a bit like dragon scales on my hand. I was amused by how many times other people compared it to dragon scales too.


Covergirl is inexpensive, even more so when you buy mini. In some of their cosmetic products the cost leads to a drop in quality, but I do love some of the polishes they come out with, and the micro-glitters in this collection are great. This color needed at least three coats to achieve opacity, and is still not as opaque as I would like at the cuticle. This particular shade wears a long time with or without top coat. It's glitter, yes, but it's pretty easy to remove and came off a lot easier than I anticipated. The color in the bottle and on the hand are completely identical and I felt like I got exactly what I expected.
I give it an 8 out of 10.
Posted by Tk Wojcik at 7:30 AM 2 comments: 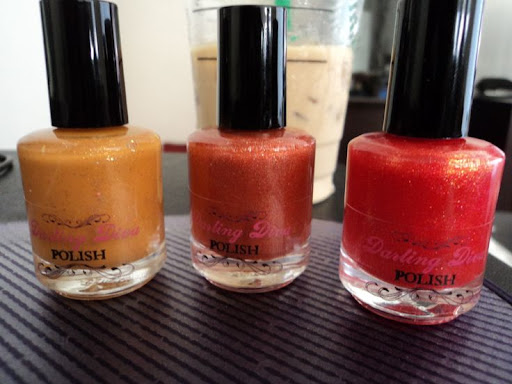 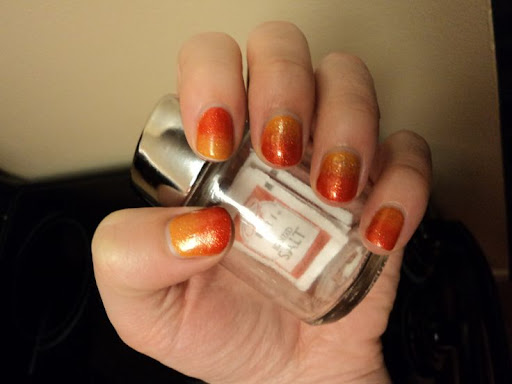 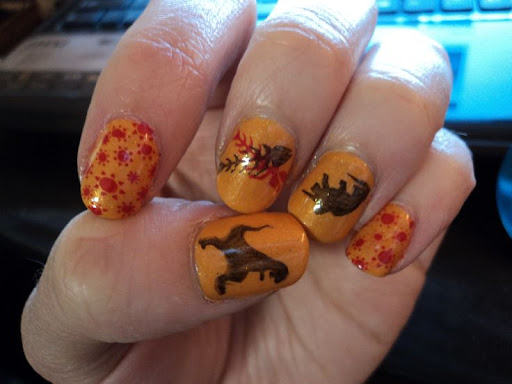 In April, I won a gift from a massive "Orange Party" giveaway over at Superficially Colorful and shortly after that my custom polishes from Darling Diva arrived in my mailbox. These are my first indie polishes, and what everyone says about indies is true - once you have one, you're going to want more.

I'll stick to reviewing the colors used in my gradient here, as I've only worn Shake Your Tail Feathers once and it is such a pretty orange holo that I think it deserves its own photo review later.

She's Kayzee!!! is a color I never ever would have chosen for myself. It is still the only yellow in my whole arsenal, and boy is it a gorgeous one. It's got shimmer and sparkle, both in fine micro-glitter particles and in a bit of an opalescent flake glitter tossed in the mix.

Whip 'er Hahr looks to lean a bit more red in the bottle than it does on the hand. It's a beautiful red-orange version of She's Kayzee!!! and packs the same sparkly punch in a warmer shade.

This was a first attempt at stamping with Twilight Rays, and I would not recommend it. It was very very smudgy and did not stamp well at all. Cherry Red on the other hand, was a fabulous stamping polish, as are many of the Sally Hansen Xtreme Wear line.

Mash plate #74 is such a fun plate, and all the images together made for a really cute, though kind of juvenile, manicure. I especially loved the full nail suns print, and will definitely use this plate again. 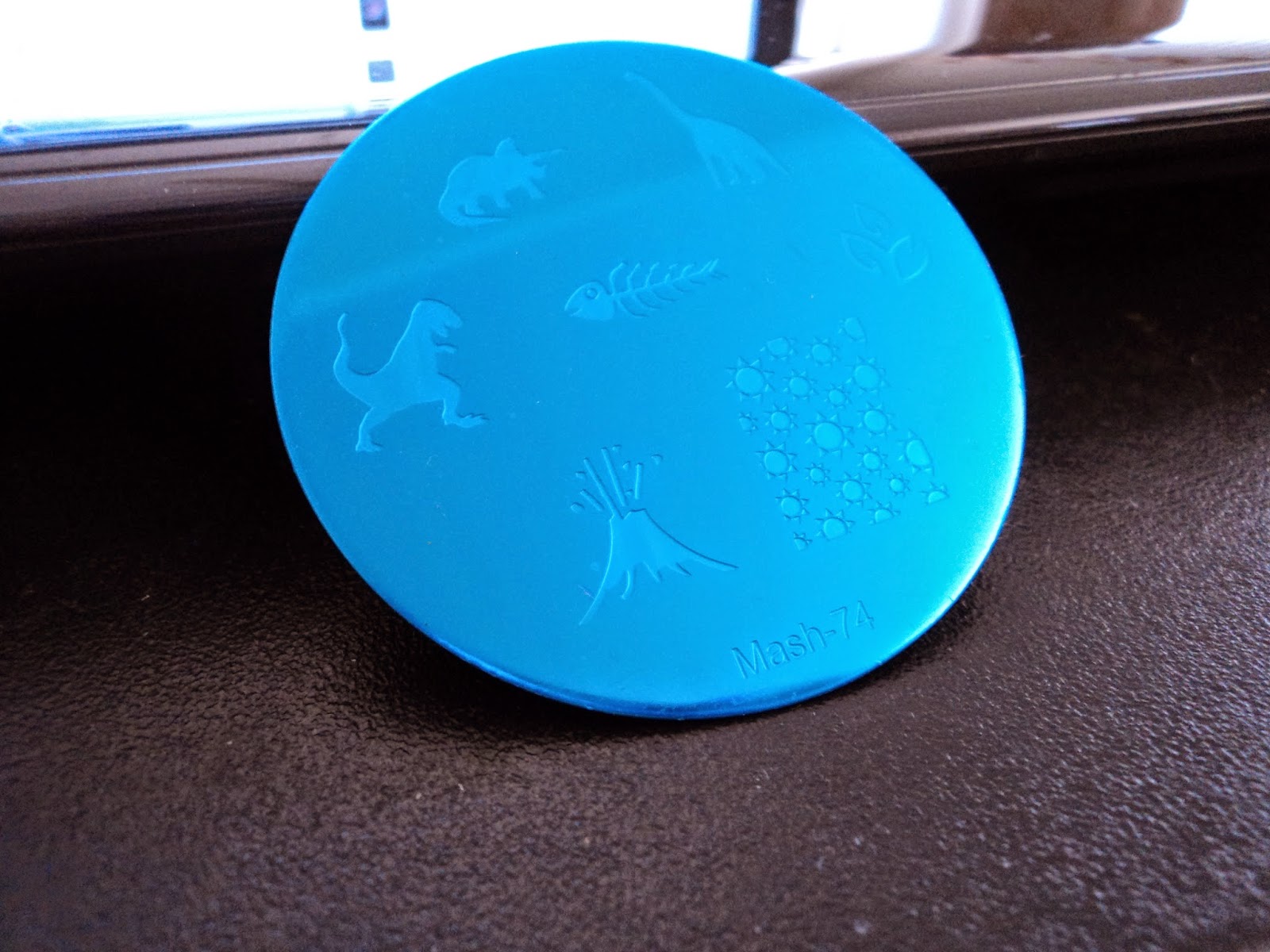 These particular polishes were a prize in a giveaway so I can't comment on what a custom polish would normally cost, however, as an indie brand Darling Diva's new releases tend to be a few dollars more per bottle than high-end drugstore polish. They both come to opacity in 3-4 coats which can be a bit much if you are pressed for time. They also look great over a more easily opaque base coat of white or black... or any other complimentary color to their shade. The formula is great and these colors wear for quite a long time. At clean up time, remember it's glitter folks. It can be difficult to remove but if you let your polish-remover-soaked- cotton-wad sit on your nail for a few seconds and then wipe, it'll budge quicker than most other glitters. After cleanup I did have a few little flake glitters still sticking around, but nothing major. The color in the bottle and on the hand are super similar, but in the case of Whip 'er Hahr, not identical. Very very close though.
I give this pair of polishes a 7 out of 10.
Posted by Tk Wojcik at 7:30 AM 1 comment:

Ingrid by China Glaze, and Top Shelf by Color Club 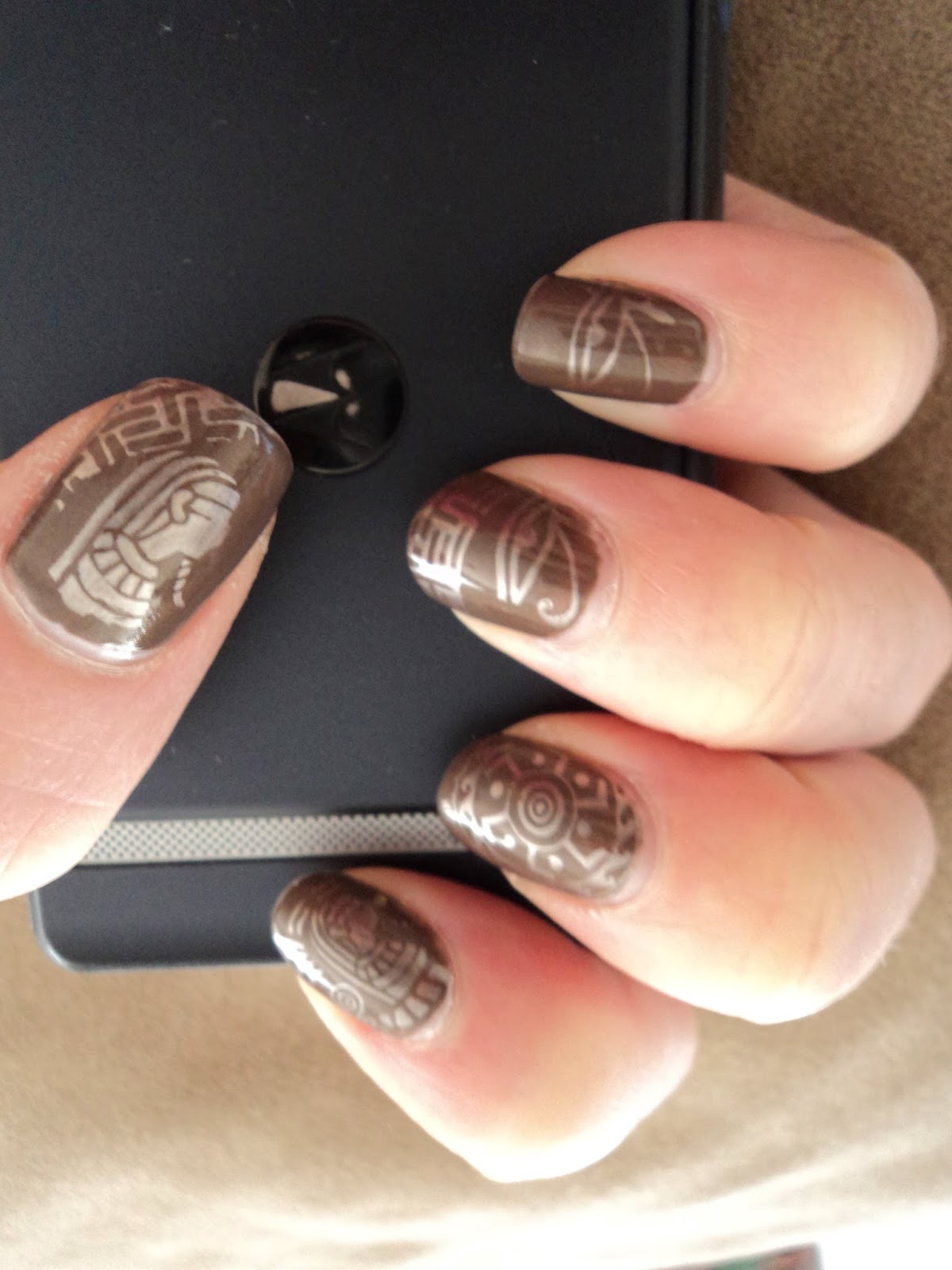 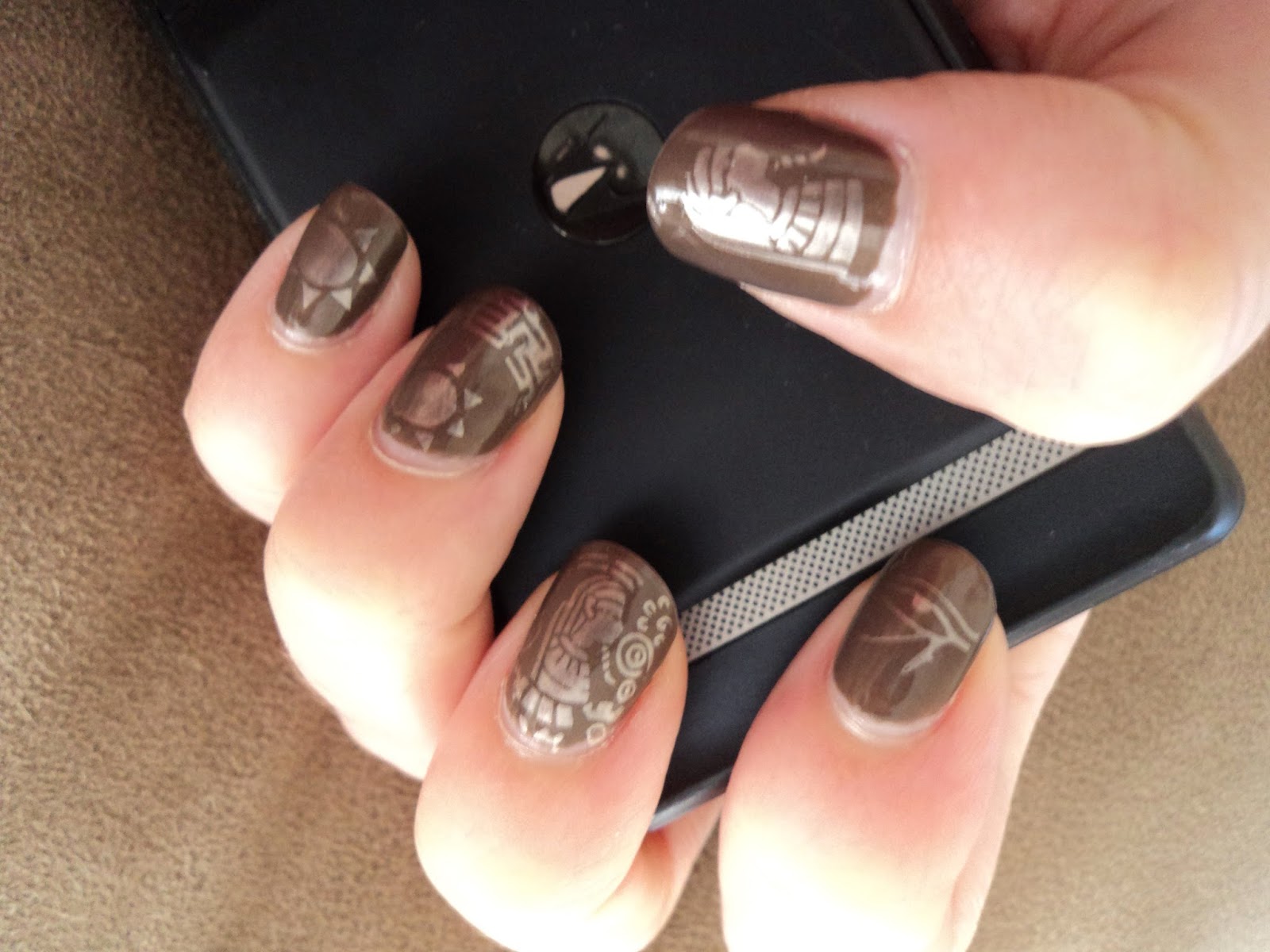 Ingrid is a very sophisticated deep brown color. In the bottle it appears to have some gold shimmer, but on the nail it is all cream and no sparkle. Despite the difference, it is one of my favorite neutral colors, and I wear it often for work.

Here Ingrid is shown stamped with Color Club's Top Shelf, which is a champagne gold color. I got this as a sample in my monthly Birchbox last year, and I use it for nail art all the time. It has great coverage in a very thin layer as you can see from the vivid stamping designs above, so it also works well with dotting tools to create your own free-form designs.

These stamps were created with Mash plate #65 which is covered in Egyptian hieroglyphic style designs. Between the two hands, I was able to use every design on the plate. The plate is etched well and I had no trouble stamping with it. The sun design was difficult to stamp without it becoming wobbly due to the C-curve of my nails, but with practice it'd be better. I was surprised by how much I loved the French tip stamp seen on the tip of both ring fingers, and will definitely use that again in another manicure.


China Glaze is not the most inexpensive of polishes, but I consider them mid-range and you get a lot of wear for your money. The coverage is great and Ingrid achieves opacity in 1-2 coats. The wear on this is about average. I've had experiences where it chipped on day 2 or where it lasted for a week without any chips. Ingrid comes off easily and doesn't stain your skin, but if you use pure acetone it will melt into your cuticles during removal and make them a bit brownish so extra clean-up is needed. The color in the bottle and on the hand are not identical, and if you bought this expecting the golden shimmer you see in the bottle, you'd be very disappointed.
I give Ingrid 7 out of 10.

Color Club is average in price and good quality. I've gotten quite a few sample size bottles from Birchbox, and found deals online for other brand new sample size bottles for as little as fifty cents. Top Shelf's coverage is great and achieves opacity in 1-2 coats. When I used Top Shelf by itself for a manicure it had great staying power and wore for quite a while without chips. This color comes off easily and doesn't stain, and the color in the bottle and on the hand exactly the same.