Weirdly, this week there was no prep needed for any of our meals. 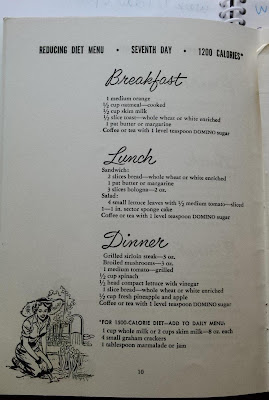 For breakfast, instead of an orange, oatmeal, and toast, I'm having some similar stuff I already had around in the cabinets at home - Cream of Wheat with butter, maple, and raisins. This is one serving of the one minute Cream of Wheat, with 1/2 tb butter, 1 tb maple syrup, and 1 oz of raisins. 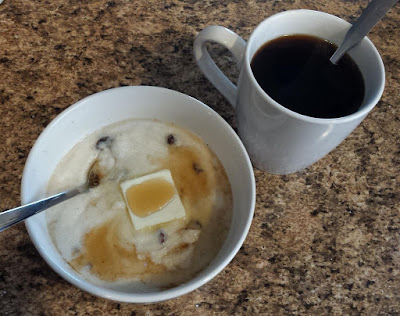 For lunch things are about to get a little weird. The menu called for a bologna and butter sandwich, but that sounds awful to me. When I was shopping around thinking about a bologna alternative I happened upon a rarity in the deli case - Taylor Ham. I've never seen this stuff outside of New Jersey, and as far as weird lunch meats are concerned the nostalgia factor is high with this one, so I bought it. It's the most indulgent junk-food lunch I've had in ages. 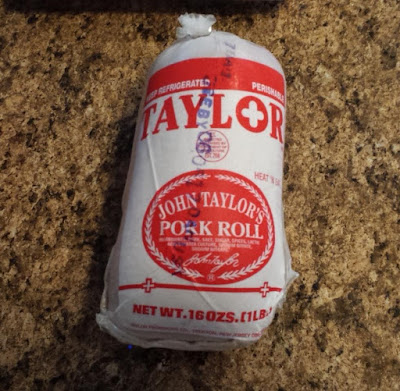 It comes wrapped in plastic, and inside the plastic is a canvas tube which you peel back and then slice off pieces as you go. It's firm and easy to slice evenly. The slices are quite small in diameter. 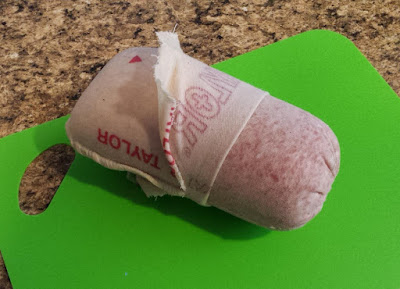 The slices need to be cut a little so that they don't bubble up while you  sear them in a pan. No extra oils or anything are needed, and the bit of oil left behind from frying the ham is plenty to cook the egg in. 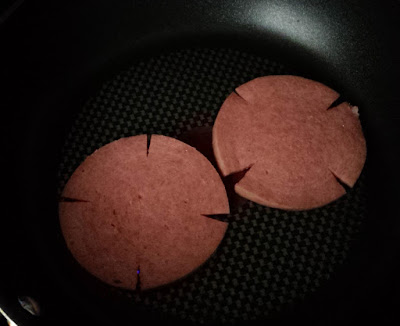 I cracked an egg into the pan after removing the ham, broke the yolk so it'd cook along with the white, and then added a piece of american cheese after flipping the egg once. American cheese is kind of nasty, and doesn't really qualify as cheese, but I think this is as close as I'll ever get to bologna and butter sandwich. This meal is so indulgent, I'm skipping the cake and salad. 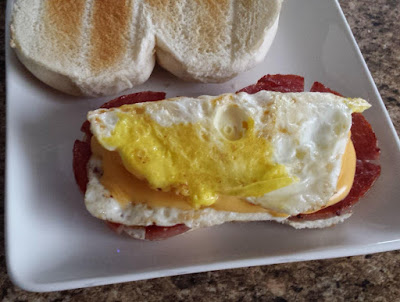 I present my "pork roll, egg, and cheese" sliders with dill pickle - 430 calories 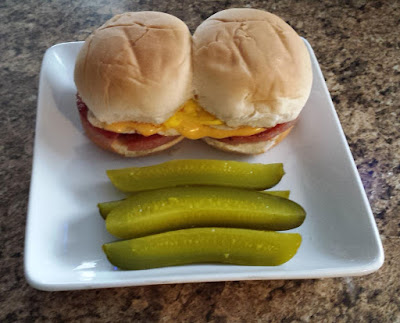 For dinner the menu listed steak, mushrooms, tomato, spinach, half a head of lettuce with vinegar, a slice of bread, and a half cup of pineapple and apple. I've made a few changes here because we still had a lot of broccoli left over from last week, and I couldn't imagine either of us eating half a head of lettuce with vinegar along with our dinner. This is 3 oz of NY strip steak, half an oz of maitake mushrooms, 4 oz of cherry tomatoes, and 8 oz of broccoli. The mushrooms and tomatoes were sauteed in a small frying pan with a spritz of oil. The tomatoes do a great job of adding a bit of extra liquid to the pan to make the cooking of the mushrooms easier with almost no oil. 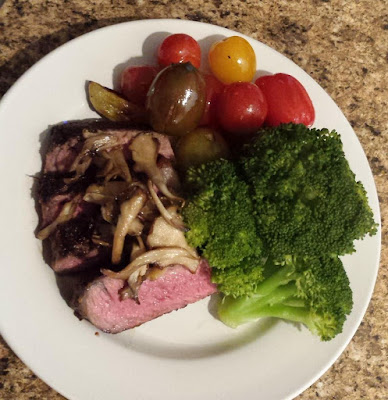 For dessert we continued with the baked apples from last week, but on Thursday it was pineapple upside-down cake day, so we had pineapple right-side-up apples instead. This is before they went into the oven, and they're probably the cutest thing I've cooked in ages. The pineapple and cherries add 52 calories to the baked apple recipe from last week. 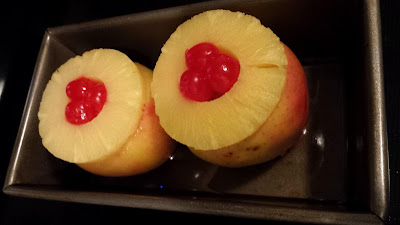 I've made it half way through the book now! Next week is pretty tame, but should be fun anyway. Thanks for reading!
Posted by Unknown at 9:40 PM