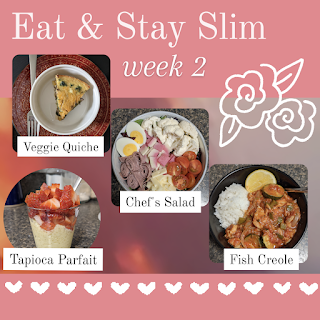 I had a hard time putting together a good menu plan this week. It seemed like every time I had enough of one thing I didn't have enough of another, and it was really difficult to fit all the things into a 1200 calorie plan. If I wasn't checking my recipes for calorie value I'd definitely be eating too much.
This week I did better on my exercise commitment than I did last week, thanks to an accountability buddy doing the same four-week core workout plan I'm doing. It is nice to have a friend to check in with to keep me on track while daily exercise doesn't feel like a natural habit.
This week's recipes were all edible, but I think they each have room for improvement. I continue having two espresso drinks per day, each with 3/4 to 1c of low-fat oat milk and 2tb brown sugar. 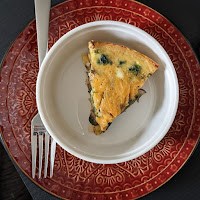 BREAKFAST: Veggie Quiche & Coffee
Veggie Quiche
for the crust:
2/3 cup AP flour
1/4 tsp salt
3 tb shortening
150g clabbered (or drained) cottage cheese
for the filling:
5 oz baby spinach, blanched and pressed
8 oz sliced mushrooms
1/4 cup sliced green onion
2 oz shredded cheese
3 beaten eggs
1 cup skim milk
1/2 tsp salt
1/8 tsp pepper
Preheat the oven to 325°. Prepare the crust by combining flour, salt, and shortening. Cut together with a fork until the shortening pieces are pea sized, then add cottage cheese. mix until combined enough to form a ball. Roll into a 1/8 inch flat disc on a lightly floured surface/, then transfer to a pie plate or 8-9" springform pan. Flute the edges of the crust in any way you like.
In a small bowl combine vegetable and onion, mix them well then spread evenly into your prepared crust. In a large bowl combine eggs, milk, salt, and pepper. Pour over vegetables, sprinkle cheese evenly on top. Bake 45-50 minutes until knife inserted near the center comes out clean. Cool 10 minutes before serving. Makes 8 servings. 232 calories per serving.
The original recipe called for a can of mixed vegetables, but I figured I'd like this better. I used cheddar cheese, but I think this could be good with a whole variety of combinations. I was unsure about the crust recipe, but after trying it I think I will make it again. Next time I'm going to use less shortening though, because I felt like it turned out more oily than it needed to be.
The flavor and texture of the crust were good on the first couple days, but after two or more days in the fridge it started to take on moisture and get a bit doughy. Reheating it in the oven helped with that, but next time I think I'll split the recipe and make two small quiches a few days apart. 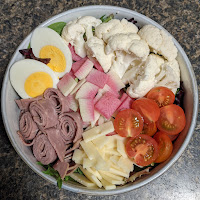 Divide all the stuff up between four bowls. Makes 4 servings of 268 calories each.

I  chopped up a head of cauliflower at the beginning of the week and prepared the rest of the salad every day at meal time. I served it with 1tb of whatever pre-made dressing I wanted. Mostly I use Brianna's Creamy Balsamic which is 80 calories per tb. I was surprised to see that the only seasoning in the original recipe for this dish comes from instant bouillon granules.

Salt chopped veggies and allow to sit for a few minutes until they start to release some moisture. Cook over medium heat with a small amount of water until tender. Add canned tomatoes with their liquid, bouillon, parsley, hot sauce, seasoning mix, and 1/2 c water. Simmer covered for about 10 minutes, then add the cornstarch slurry. Stir well, add fish, cook over medium-low heat 5-7 minutes until fish is done. Serve over 1/2c rice. Makes 5 servings at 224 calories each. I added half a medium zucchini, sliced and steamed, for an additional 25 calories.

This was just okay. The fish breaks down a lot on subsequent reheating, and the flavors were just not very exciting. Without the seasoning mix it was a good base of flavors but so very bland. I made my husband's portions with sliced chicken cooked in the same sauce, and he had about the same opinion on the flavor. Because my daily count for bread exchanges was too low this week, I allowed myself up to a cup of rice with this meal if I wanted it. I was afraid to make the version of this pudding where you whip the egg whites and don't actually cook them, because I wasn't sure how safe it would be to keep and eat over a few days. I went ahead and used the same ingredients to make regular old tapioca pudding and served it with a generous portion of strawberries.

Combine the milk, salt, tapioca, and sweetener, let stand for five minutes. Beat eggs, incorporate into other liquids, heat over medium-low heat until near boiling. Remove from  heat, whisk in vanilla. Chill before serving with diced berries. Makes 8 servings at 84 calories each.

The tapioca came out a bit eggy and I think that might be because I cooked it over too high heat. I'll have to give it another try because I do love tapioca. In order to get my other fruit exchanges in, I allowed myself to eat one or two cuties tangerines per day if I wanted them.

Here's the nutritional breakdown for food exchanges and my entry for a full day in LoseIt! 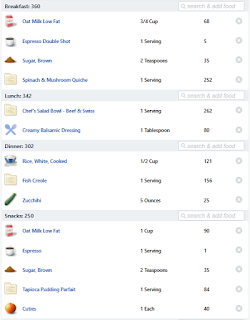 Coming up next, I'll be having a poached egg breakfast, a carroty potato lunch, and a tropical stir fry for dinner. Thanks for reading, see you next week!